I was a young child when playgrounds began appearing at fast food restaurants. The first such playground in our community had a 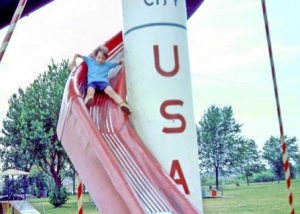 HUGE rocket slide. You reached the top by climbing a ladder inside the rocket. At the top, you could see everything just before you slid down the winding slide.

My friends and I were so excited as we watched this rocket being built. We talked for weeks about how much fun it would be. I‘m not sure I realized how much I didn‘t like heights until I climbed out on top of the rocket for the first time. I immediately began insisted that my mother come and get me down.

My own sons were never like that. The only thing they ever insisted from the top of a slide was, “WATCH ME DADDY!” They may have taken their time climbing up a large slide, but they quickly moved beyond their discomfort and took off. I was never able to get beyond my fears enough to enjoy slides. But my sons always enjoyed the prospect of fun more than they feared the heights.

In Matthew 14 (verses 22-33), the disciples are out in a boat on the lake when Jesus is seen walking to them on the water. Peter steps out of the boat and begins to walk toward Jesus. Eventually, Peter‘s fears overwhelm his faith and he begins to sink. We often make much of Peter‘s failure, forgetting that he was the only one brave enough to get out of the boat. It may not have been pretty, but at least for a few steps, Peter walked on water. None of the other disciples could ever say the same.

We like to talk about doing things, especially when we will have more time or more money. Sometimes it may just be fear that holds us back. We can never move forward in life or faith unless we stop making excuses and cry out “Watch me DADDY!” No one would every get married, have children, buy homes, go to school or take new jobs if we did not take risks.

The Advent season is a great opportunity to reach out to that old friend whose been on your mind.  Stop waiting for a better day that may never come and find the time to patch a relationship today.  Join that study group, volunteer and touch someone’s life now.  The fast approaching New Year is the perfect time to step out in faith to do something or become a part of something that is larger than yourself.  If we wait until there is a better time, we’ll never do anything.  Don’t let distractions and fear keep you from living a life that makes a difference now and tomorrow.  Get moving!

No one ever walks on water without first getting out of the boat!