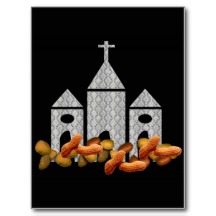 A few years ago, a single mother of two very young children made a comment that troubled me. We had been discussing some difficulties she had been experiencing when she said, “I wish my children were old enough to come to your church.” I quickly described our nursery and children‘s program. “No, you don‘t understand,” she said. “They‘re not old enough for me to leave them.” When I suggested she could stay at church with them, she responded…”After all I‘ve done, God couldn‘t possibly want me in church.”

A person doesn‘t come to that belief on their own, they learn it from supposed “Christians.” In her short life she had been to many different congregations. She had even sought refuge in some of those same congregations. In those times and places where she sought grace and guidance she found judgment and ostracism. What’s sad is that people never realized they were doing it. It could be a frustrated sigh from someone nearby when a child who was too afraid to stay in a room with a stranger can‘t be still during worship. It might have been an accidental frown from someone when they saw what she was wearing. It might have even been the person who wanted to help by praying for her sins when they found out that she was a single mother because she left her husband.

In Matthew 5:7, Jesus says, “blessed are the merciful, for they shall receive mercy.” People who spend their time highlighting the faults of others are spiritually miserable people because they are missing many blessings taking place around them. Like the fact that this woman had left an abusive husband before he hurt the children. We can not let our expectations and desires make us spiritually un-merciful. None of us are perfect, and yet in our quest for a perfect church or worship service we can go “nuts,” accidently leaving people out. God loves everyone, but probably prefers “fruits of the spirit” over “religious nuts”!