Posted by revarant on January 29, 2015
Posted in: relationship, teaching by example, Truth. 1 Comment

Quite a few years ago, a friend received thirty-six flowers from her husband to celebrate their thirty- sixth wedding anniversary. The flowers were beautiful long stemmed roses, wrapped in green paper. She had never received flowers before and absolutely adored them. She was intent on helping them survive as long as she could. She trimmed the stems and extra leaves. She even placed them in fresh water, which she changed daily. She purchased and used special products advertised to “prolong the beauty of fresh flowers.” A couple of weeks later, she remarked to her husband about how beautiful the flowers still were after two weeks. He began laughing and pointed out that the flowers for which she had been meticulously caring were not real, but expensive silk. They were so beautiful crafted and appealing that it was nearly impossible to see that they were fake.

Flowers are not the only imposters in the world. Everything under the sun can be imitated…even Christians. Christianity is more than a name or title. It is a faith, a hope and a lifestyle. Jesus said: “A new command I give you: Love one another. As I have loved you, so you must love one another. By this all men will know that you are my disciples, if you love one another (John 13:34-35).” Our faith and hope in Christ is expressed through our relationships with everyone. Real Christianity is patient and kind. It is not self-seeking but God serving. We serve God best when we support and trust one another. Ours is a faith that always protects, always trusts, always hopes, always perseveres and rejoices in the truth (I Corinthians 13:1-13). This does not mean that real Christianity tolerates just anything. It means that real faith is expressed not through compliancy, but in actively pursuing and encouraging what is JUST and TRUE.

The month of February sees St. Valentine’s Day and the beginning of the season of Lent with Ash Wednesday. It makes it a great time for us to reflect upon our faith journey and intentionally examine the leaves and petals that make up our lives for areas in which we might become more authentic. My friend adored her husband when he brought home the flowers until she found out that they were fake. They were still jus as pretty as before, but they were not real. The beauty and glamour of the gift was found in the reality of life, not its imitation. “And now these three remain: faith, hope and love. But the greatest of these is love (I Corinthians 13:13).”

When my daughter was a few years old, we agreed to invite a cat into our family. For weeks we searched in vain for a kitten. One day, as 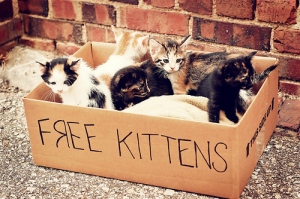 I was waiting to see my doctor, I noticed a handwritten sign that read: ―Free Kittens, see receptionist.‖ My physician had rescued these kittens and was keeping them at her farm. There were kittens everywhere. As we looked, the doctor asked if we wanted a boy or a girl kitten. When we requested a boy, she started inspecting the kittens. She picked one up, then another and another. Finally, she handed one to me and said, ―Here is a boy.‖

Needless to say, my daughter was pleased. So was I, at least until the next year. Then it happened. That little boy cat had kittens. My wife had tried for months to convince me that this cat was a girl. I would not even look. There are just some things that you expect your doctor to know. When the cat started getting fat, I accused my wife of over feeding the cat. Never once did it occur to me to check the cat for myself. I just took someone else‘s word for it.

We do that a lot these days. We hear rumors or gossip, and very often we will pass on these rumors and gossip without even checking their truth. We simply take the word of those we trust, and sometimes even those that we don‘t trust. We do it in our daily lives at home, work and even in church. It can be very dangerous to take the word of someone at face value. Sometimes we only hurt ourselves, but other times we hurt those around us.

I am reminded of Luke 9:18-20. Jesus asked the disciples, ―Who do the people say that I am?‖ The disciples answered, ―John the Baptist; but others say, Elijah; and others, that one of the old prophets has risen.” It would have been a shame if the disciples had taken the rumors and the word of the people at face value for truth. Imagine what they would have missed. Peter looked deeper, and he sought for his own answer. When Jesus asked him what he thought, he said, ―The Christ of God.‖ The rest of the world failed to recognize Jesus, because they did not look for the truth.

Many times we complicate our own lives, miss opportunities, and even bring hardships upon ourselves and those around us simply because we donut take the time to look for the truth in all matters. Life is hard enough as it is without us making it more difficult. For us to really know Christ and to effectively make Christ know we must seek the truth. As for me, well if you know anyone who needs a kitten, send them my way.