A Really Good and Faithful Servant

Posted by revarant on November 22, 2012
Posted in: Faith in Action, Prayer, relationship. 4 Comments 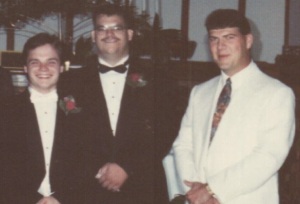 me, Joey Parler & Kevin Jenerette
at my wedding.

I grew up with a great guy in High School.  He was part of our eclectic circle of six friends that made life fun.  Kevin was just a good

person, a really good person. Even as a teenager he was wise beyond his years. He was the type of person that could not be pressured, and would not pressure.  Knowing who he was and Whose he was allowed him to stand fast in that identity without being arrogant or judgmental.  When Kevin was with us, we were all better people.  His influence stayed with us and with the march of time we found ourselves growing into better people. Paul writes in Romans 12:2, “Don’t copy the behavior and customs of this world, but let God transform you into a new person by changing the way you think. Then you will learn to know God’s will for you, which is good and pleasing and perfect.”  That’s how I remember Kevin.

His presence changed the dynamic of any group for the better.  When I found myself struggling as I recovered from an accident, Kevin would show up and brighten everything.  It was not possible to be depressed in his presence. Any celebration was better when Kevin arrived.   It was as if his goodness was contagious. He just seemed to bring out the best in people. I often thought he had all the characteristics I wanted to have; confidence, intelligence, patience and humor. I realized years later I was developing those gifts each time I was around Kevin. I was becoming the man of faith I am today.

Earlier this week I received the unexpected word that Kevin had taken ill with a poor prognosis.  Just hearing those words made my world feel somewhat colder and darker.  I found myself thinking about all those Sunday afternoons we spent playing basketball, and how he would sing to himself each time he body checked me.  I thought about the times we cruised the old Conway mall or the “grass patch.”  I can still hear his voice singing at my wedding or calling me “Mel-sie” each time he saw me with that smirk on his face.  I remember how much fun we had making movies for drama class with his state of the art Commodore 64. Most all I remember how easy and enjoyable it was to be around him. Even then he was already the kind of man I am still trying to be.

Just a few hours ago the world lost the best man I have ever known and my heart is broken as is everyone’s who has ever known Kevin or his wife Caren. Even so, I have found myself telling my children about Kevin and smiling with each memory.  That’s what James Barrie meant when he said, “God gave us memory so that we may roses in December.” Paul actually speaks to the same thing in Philippians 4:8-9, “…Fix your thoughts on what is true, and honorable, and right, and pure, and lovely, and admirable. Think about things that are excellent and worthy of praise. Keep putting into practice all you learned and received from me, everything you heard from me and saw me doing. Then the God of peace will be with you.”  Each memory allows me to celebrate who Kevin was and allows God to tend to my heart.  Even my memories of Kevin are making me a better person.

Tonight I am reminded of several things.

First we know not when our time will end, so we should live each moment as testament to our faith so others may follow.

Second, each encounter we have with anyone transforms them.  We must decide if we want that to be a good or bad thing.

Thirdly, be thankful.  I’m finding it hard to be thankful this Thanksgiving, but I know I should be. I have many reasons to be; family and friends who need to know how thankful I am for them, a God who loves me in spite of me, and a life that has been touched by one like Kevin.

And finally, live each moment as if it were your last.  Part with each person as if you will never meet again.  Leave the impression on everyone’s heart that reflects how you would like to be remembered. Each interaction may be the epitaph we write for ourselves in their hearts and minds when we’re gone.

Kevin (May 24, 1970-November 21, 2012), you are already missed my friend.  I’m sure even now you are hearing from the mouth of our Lord;  “Well done, good and faithful servant; you have been faithful over a few things, I will make you ruler over many things. Enter into the joy of your lord (Matthew 25:23).” My prayer is that I can follow your example so that we meet once more.

4 comments on “A Really Good and Faithful Servant”